Steeped in the rich cultural deposit of Jiangnan, Jiangnan University is long active in arts and culture events. JU has a strong commitment to the arts and culture, with several museums, professional and student performing groups. JU people can find high quality performances such as music, theatres and dance performed by students and professionals on a variety of stages. The museums on campus, which help people to know more about Chinese culture and JU, are of great interest for our visitors.

JU’s textile engineering and fashion design are the best of their kind nationwide. This school has been known far and wide as a place of knowledge in textile and fashion design. Exhibition speaks louder than presentation or introduction. Students and teacher’s creativity and achievements can be better displayed by this Traditional Folk Costumes Museum. Clothes and accessories in this museum were all designed and colleted by teachers and students of this school. All of them were or are used by Han people of China. There are 56 ethnic groups in China. And Han people accounts for more than 90%. Therefore, to a certain extent, Chinese culture as a whole can be represented by Han people. This museum coves a floor space of over 800 m2 and consists of four exhibition halls: South China Hall, North China Hall, Special-subject Garment Accessories Hall, and Inheritance & Innovation Design Hall. Teachers and students collected Chinese-style coats, jackets, gowns, Qipao and others from 39 counties and cities of 15 provinces and municipalities. 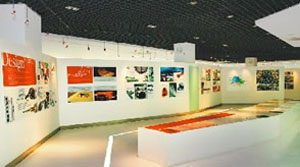 In line with its academic tradition, School of Design at JU enjoys an international reputation in the field of design. The works of students and teachers at School of Design have been acknowledged internationally which can be testified by international awards won by students at this school. Design Exhibition Hall displays the history and achievements of School of Design at JU. Works exhibited involve lifestyle design, transportation design, interaction and consumer electronics, tradition and regional culture design, interdisciplinary system design, urban landscape and architecture design, media art, design theory research, design awards, stories of outstanding alumni, etc.